I’d say I’ve never been more disappointed in all my life, but it wouldn’t be true. As if it changed anything… And before anyone had a word about me being negative. “Think Pink” was my old blog.

Once again turned out it’s totally enough stressing about something when time comes. I haven’t been stressing too much about this meeting, but I had my usual train of thoughts of how this could go wrong, meanwhile trying to persuade myself and everyone else that this is a big step and this could even bring things back to good old normal times. And then… he didn’t come. Like, he didn’t even call anyone to say he wouldn’t come afterall. This is so bad on so many levels and I know you can’t chose your family. I mean there’s a really small part of your family you actually are able to chose. The rest is up for acceptance and unconditional love.

And people babble about unconditional love and acceptance for strangers, but accepting crap on the long run can be really exhausting and I totally can understand why people don’t want to put a lot of effort in accepting random stupidity when there’s enough to put up with in their nearness. 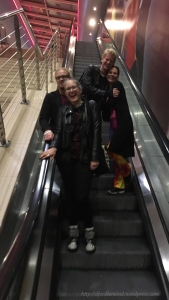 So, yesterday we went to watch Atomic Blonde. The plan was to watch it when Pajul’s home and now she is and Atomic Blonde still has a few screening times and we could even find one with original sound and subtitles so Peter didn’t have a problem coming to the movies with us. Mark joined in the fun too. Like, there was no option of not inviting him, I was too curious to see how his scene turned out. Well, proudly presenting, while he was sitting next to me I saw his full-make-up face on full screen – I guess that’s his appearance is the perfect definition of a close-up shot. Haha!

Also, Linda appeared more than once, right next to Charlize Theron (in the umbrella scene), so pretty much she’s the winner of the whole game – which obviously is not a game at all. I guess these kind of stuff happen when you chose a trendy raspberry colour to your hair rather than green and you’re a pretty-face-baby as well. LOL I didn’t even dare to go up to Diego Luna to ask for an autograph and I’m not good with cameras anyway, so no envy here, just hyping about how cool it is to see friends on the silver screen. 😀

Pajul was worrying about Peter being in the country for 2 days already and not seeing anything from Budapest – now he had, a bit misleading Berlin-Budapest tour as of Hollywood stlye. LOL Later I slowed down on the bridge so he could have a nice view of the night scenery: the castle, the citadel, the parliament etc. So I think even if this would have been it, he’s good to go. LOL It’s pretty cool though I can understand him quite well. I was worrying I wouldn’t understand his British English.

So, Pajul’s home. Dóri’s home as well. The plan is, Pajul’s coming to town on Wednesday and Dóri’s coming on Thursday (along with a British friend). Mark might join Pajul and Peter and our plan was that he’s coming Saturday as well. And Friday we might have a lunch with Dóri & Ria and in the evening we’re going to Margaret island with Pajul’s friends and then we might go to Solymár to see Carbonfools. xD Plus, it’s high time I meet Ria and also exercizing season is starting. I wonder how I’m going to find time for my crane fleets and butterfly army… Let alone that little creative game we’re playing with my friends… One day I might make the results public, until then, more info in private. ;P

So, what happened lately? Not much. It seems. When I start to think about it, a lot more. xD I’ve been out, training with Zimi a number of times during the summer, which was nice. At least I moved my arse a bit, but occasionally I tought I’d just die. Like, damn, training in 30+ °C outside can be challenging.

I’ve been to the cinema with Orsi (etc.) a number of times lately. We’ve watched Baywatch (oh, please, I know you wanted to make a parody of the series, but you could have made it a GOOD one – what a pity… what a pity…) and A hitman’s bodyguard – which I expected to be like Baywatch really, and it turned out to be the best comedy I watched for a long time. Like, I was literally laughing out loud a lot.

Oh, wow! I haven’t written an update of my life since I got back from China? Wow! Okay, let’s see, my stamp dress did get published in Hungarian Post’s corporate magazine – which turned out to be a beautiful, HQ  brochure, I’m beyond happy about it.

I’ve been to Croatia with Kati and the guys for a long weekend. That was fun. 🙂 I’ve been to Békésszentandrás with the Madagascar gang also for a long weekend. While the majority was out fishing we went to visit the zoo in Szarvas as well as the mini-Hungary park. Turned out there is tanuki in Hungary! Like, really! Not only they are in that zoo, but they CAN be found in our country wild and you can totally hunt it. What the hell? And you get surprised when they find new species in oceans and in the heart of rainforests. You find “new species” in your own tiny country. WHAT?! 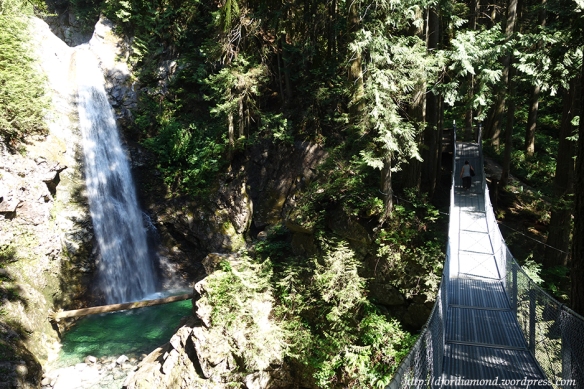 I’ve also been to Canada with family and friends. I have planned on making a few posts about it, but oh well, I planned doing the same thing with other trips as well. That’s why I say I’m not a blogger material. So, basically, Canada is huge and beautiful. Canadian people are nice and helpful. It’s an effing long flight from here – apparently the more I fly the less I enjoy it. But at least I’ve watched this pretty cool Korean film onboard. And saw Diego Luna at Frankfurt airport. What else?

I saw wild orcas. Like really. (Took enough pills so I didn’t get sea-sick.) Helen the dolphin hit me with a fitball (never ever washing that cardigan again x’D). A cheetah was purring for me, but we had 2 fences between us so I couldn’t cuddle with her (I’m pretty sure she was a girl – her behaviour was very feminine). Almost same applies to the black bear, but he was not purring. He just wanted to cuddle. And yes, I totally understand why you need double fences. Like, I KNOW they are wild and dangerous. I KNOW they are not plushies and that I’m pretty much the prey when it comes to the two of us. But they are there and so sweet and purring and looking at me with those friendly eyes and so much for common sense. So much for it. Like in the meme: You know that tingly feeling when you get to like someone? That’s common sense leaving your body. Exactly.

This is where I want to be now…

And when I got home I finally sat down and made the string-art I wanted to for some while now. So now I’ve got my own cheetah, even if she’s not purring for me.

Bea and her family was home from Japan for some time. We only could meet like twice, but knowing her lifestyle, it’s a pretty nice achievement. Thing is, her son likes me too. Alice got totally shocked about it. Like, yeah, I don’t really know what to do with these tiny humans, but for some reason they like me. ;P Orsi’s baby seems to like me too. It’s me who doesn’t like her mother. She doesn’t let me dress the baby in … err… what are those called? Long-sleeve bodysuits I’m going to call them. So Orsi doesn’t let me dress Lili in long-sleeve bodysuit, because she says it’s too warm. Like yeah, it’s the end of summer, but by the time winter comes (nope, winter is not here yet, winter is just coming XD) she’s going to grow a lot. She’s small now. And I want my Sprite! I’ve got my Rainbow Brite trousers and I want a pic with my own Sprite. And Lili’s totally great size for that. xD *sigh*

I got so mad the other day. My plan was to have a “wild night” watching Rainbow Brite with a mug of tea or something. And the version I found had such terrible dubs I couldn’t manage to watch more than like 3 minutes. I know, I could have watched it in English, but nope. I’m not interested in it in English. I want to watch it in Hungarian with the good old dubs, not this crap. Bahh…

So, what else? Oh yeah. Another Alice Cooper concert. It was fun! 😀 The old man knows how to party / how to make a show. It was extremely hot. Like, hell. Really. Esp. when sis took me in like 4th or 6th rows. (Depends of who you ask, her or me.) I’m extremely proud of my make-up skills though. Ps. I’m so dead as soon as they realize this pic is up on my blog. xD

We’ve also been to Visegrád to see the fireworks. The National day is 20th August and most of the celebrations are held that day, but for some reason in Visegrád they have the fireworks the night before. It’s awesome, a lot less people, wonderful fireworks above Danube and you’re home in no time. ;P So, on the big day I just went over to Orsi’s place to play board games with them all day long. 7 Wonders is a pretty fun game, Bang’s not bad either. I keep realizing I should play more board games. Really.

Okay, I think it’s going to be enough for now. I’ve got a pile of invoices to deal with afterall… I want to sleep!

Listen to: Depeche Mode – Behind the wheel